Your Liver.
Your Life.
Our Experts.

Good liver health begins with you

Actor Suriya, who kicks off the ‘Dusk to Dawn Marathon’ on Saturday, shares his fitness mantra.

The six-pack he sported in the 2008 Tamil film Vaaranam Aayiram sparked off a fitness rage. Soon, younger actors followed suit. Youngsters and college students started working out to stay in shape. Some of them may have given it up subsequently. But not actor Suriya. He’s still at it — sweating it out at the gym every morning, and running at the Theosophical Society whenever he can.

He hopes to run — at least a little bit — this Saturday night, for he’s the chief guest of the ‘Dusk to Dawn Marathon 2014’, the first night marathon in the city. The Marathon supports the cause of organ donation, liver wellness and liver diseases, and was born from the idea of generating awareness in the city about these causes. The actor, well known for supporting such causes, says that he was more than happy to be associated with the run. “Liver diseases are silent killers; everybody needs basic awareness on liver wellness,” he says.

One of the ways to keep fit is by doing basic cardio exercises for just a short while each day, expresses Suriya. He is one actor who swears by the sweat-and-be-fit mantra. “It is well known that lifestyle changes have brought in diseases,” he explains, “It is important to be aware of one’s fitness. I’d urge people to devote just 30 minutes in a day to basic fitness — it could be running or a game of shuttle. It’ll make you feel younger.

Organ donation is another area that the star is passionate about. By taking part in campaigns and appearing during the end credits of the Tamil film Chennaiyil Oru Naal, he has always stressed the importance of how organ donation could go a long way in helping people in need. “When we can make a difference, we should,” says the actor, who is currently working on director Venkat Prabhu’s Mass.

The ‘Dusk to Dawn Chennai Marathon 2014’ will be held on November 22. Presented by Centre for Liver Disease and Transplantation, Apollo Hospitals in association with ‘Neville Endeavours (D2D)’ in support of Love Your Liver Foundation (LYLF); it is brought to you in association with The Hindu. To register, log on to https://youtoocanrun.com/races/dusk-to-dawn-chennais-night-marathon-2014. 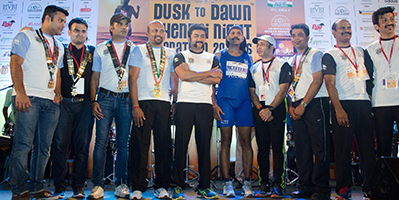